In the past decade sea-level rise models have popped up faster than fungi after a storm: today it seems like every agency has one. However in August USGS geologist Patrick Barnard and colleagues at Point Blue Conservation Science unveiled a new feature of their Our Coast, Our Future (OCOF) tool that none of the others have: a projection of how sea level rise will impact local groundwater along the California coast.

Using groundwater modeling led by Kevin Befus from the University of Arkansas, OCOF users can now look at their local estimated depth to groundwater and use soil permeability assumptions to identify where future sea level rise may push groundwater up and cause inland flooding. Befus demonstrated the feature for the Bay Area in an August 10 webinar, using the tool to show possible locations of emergent flooding from groundwater in the South Bay and Point San Pablo from one meter of sea level rise.

Though the model is long-term and doesn’t account for seasonal groundwater change due to storms or pumping, it is one of the first tools available for the public to plan for groundwater impact from sea-level rise. The City of Manhattan Beach recently used the OCOF feature to assess their risk of groundwater flooding due to sea-level rise – ultimately finding a low projected hazard as the model showed a deep water table under most of the city.

The advancement comes from the team and model that in 2019 released a statewide analysis showing that the combination of higher tides and storms would expose up to 600,000 Californians and $200 billion of coastal development to flooding by 2100 – about three times as many people as modeling just sea level rise alone.

“We are trying to provide products that can support coastal adaptation options so we don’t see these numbers in the future,” said Barnard in the August 10 webinar, stressing that none of the impacts the OCOF tool shows are predetermined – they will only come to pass if we do nothing. 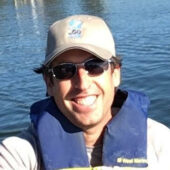