Warren Logan is confident that if we fight for safer streets, we can have them. As the former Policy Director of Mobility and Interagency Relations with the City of Oakland, Logan has played an instrumental role in fighting for safe, bikeable, and walkable streets throughout the city.

“In Oakland, by the numbers, you are more likely to be hit by a car than cancer or a stray bullet,” says Logan.

According to a 2018 Oakland Equity Indicators Report, the City of Oakland experiences approximately two severe or fatal traffic crashes each week, which disproportionately impact those who are Black, Indigenous, or people of color (BIPOC), high priority communities, and seniors.

During Logan’s tenure with the City of Oakland, he directly addressed the issue he was most passionate about: transportation equity. He strongly advocated for the Safe Oakland Streets (SOS) Initiative as an emergency response to the pandemic and traffic safety concerns.

“Black and brown people are taught to accept what is in front of them,” says Logan. “We and everybody deserve more.”

From implementing traffic safety projects to conducting citywide crash analyses, Warren made BIPOC communities a priority and increased the participation of the most impacted residents in community meetings. He also worked with communities and local businesses on Oakland Slow Streets, which designates certain blocks for use by bikers and pedestrians only.

Through this new position, Logan was able to apply traffic safety to other emerging issues such as the need for more public open space. For example, Logan advocated to remove the I-980 freeway, which has historically divided West Oakland from the city’s main downtown.

“In two years, we were able to turn this project from a pipe dream to a million-dollar state-sponsored concept study. It is now someone’s actual job to figure out what will happen to this freeway,” says Logan.

Logan’s passion for community reflects his family’s long history of civic engagement. His grandfather, Theophilus Logan, currently 105 years old, was instrumental in supporting Black families trying to purchase homes in Southern California as the first African-American Board of Realtors president.

“Every person in my family asks: how do we help the people around us?” says Logan. “My answer: I try to think about the upstream issues and ask the ‘why’ questions to get to the heart of things.”

After two years with the City of Oakland, Logan joined Lighthouse Public Affairs. This California-based consulting firm tries to foster collaborative relationships between government, neighborhood leaders, and private stakeholders so they can tackle big challenges, such as climate change, affordable housing, and equitable mobility, together.

In the middle of one of the hottest years on record, Logan says he wants to fight the idea that there is nothing we can do about climate change. “I hope that we take hyperlocal action [to increase our] climate resilience,” says Logan. “We are somewhere between a sinking ship and melting iceberg, but I want to prove to people that we can dream again.” 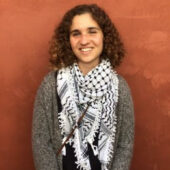 is a labor organizer based in Oakland, California. She graduated with a Master of Public Health in Global Health & Environment from the UC Berkeley School of Public Health in 2020 and completed her undergraduate degree from the Environmental Science & Management program at UC Davis. Throughout the past decade, she has collaborated on a range of advocacy campaigns to address issues of environmental justice in the Bay Area and Central America.