“There’s a lot of dialogue from the state about caring for disadvantaged communities, but … when it comes time for the construction funding, it’s been really short.”

Raúl doesn’t spare much thought for the catastrophic levee failure that could put his neighborhood of many decades underwater. He’s more concerned with the arsenic that has rendered the town’s tap water undrinkable and necessitated bottled water deliveries every few days for the last five years.

Despite that complaint, he enjoys life in Grimes, a Colusa County community of a few hundred people surrounded by farmland and nuzzled against an earthen levee that holds back the Sacramento River. In Spanish, he tells me that he likes the safety, the quiet, the community. Colusa County’s website describes Grimes as home to “a thrifty class of people;” the federal government considers it a “severely disadvantaged community.”

A hundred miles southwest, the island of Belvedere rises from the bayward edge of Marin County, where tasteful mansions on a hill boast views of both Angel Island and the San Francisco skyline. A few square blocks of houses at sea level form a suburban oasis around a lagoon. The 2,000 residents are among the wealthiest per capita of any town in the U.S.

Grimes and Belvedere were the only two northern California towns that the Federal Emergency Management Agency (FEMA) shortlisted this year for flood prevention funding from the Building Resilient Infrastructure and Communities (BRIC) program.

The program is being heralded as a new era for the powerful disaster recovery funders: preventing disasters before they happen. It favors projects with qualities that are buzzwords of late: boosting resilience to climate change, including nature-based solutions, and protecting disadvantaged communities. But when I visited Grimes and Belvedere to learn more, I discovered that prioritizing equity and climate resilience in flood protection is much easier planned than done.

Both the Grimes and Belvedere projects were galvanized by FEMA updating its flood zone maps. Grimes realized that that unless their levee gets a makeover, the entirety of the town will be in a flood zone in the eyes of insurers. A flood insurance map can take up to five years to amend once FEMA publishes it, according to FEMA region nine spokesperson Frank Mansell, so getting it right matters.

View from atop the levee that protects Grimes from the Sacramento River. Photo: Sierra Garcia.

Even at the end of a parched summer, it’s easy to stand atop the dirt levee and eyeball the Sacramento River on one side and the flat parcels of Grimes on the other and see that the river is higher. If the river rose enough to overflow, the water would rush into the streets, the town’s only general store, the post office, and the modest homes.

Although some folks I chat with have seen the river rise close to level with the top of the levee, overflowing isn’t the scenario FEMA worries about. Because the levee was built with sandy local earth, the agency fears that water could seep through the base, weakening the dirt deeper within the levee over time and eventually triggering a catastrophic collapse.

For Lewis Bair, the general manager of the reclamation district in charge of levees in Grimes, the prospect is personal. “I work with the other landowners and we all know each other. My kids went to school with half of the folks,” he told me.

The FEMA announcement about Grimes’ selection for a BRIC grant touted the nature-based solutions it included, specifically floodplain restoration upstream of the town. Reconnecting a river to its historic floodplain helps create habitat for fish like threatened salmon, and giving a river more space to spread out and slow down can alleviate flooding in other areas.

Julie Rentner-Harrison, the president of nonprofit River Partners, praised the decision to bundle 11 acres of habitat restoration for salmonids with Grimes’ levee revamp. But she also put the scale of the floodplain restoration in perspective, drawing on decades of experience in the region: “I don’t imagine that we’re going to see an effect on water surface elevations in Grimes during flood stage without something of a similar magnitude…[to restoring] a couple of 1,000 acres.”

Renter-Harrison also “[doesn’t] expect that the floodplain restoration part [of the Grimes project] is a real contributor to the flood risk reduction part of it,” a statement which neither engineer on the project interviewed for this article refuted.

Updating the levee doesn’t have a clear connection to climate extremes either, although one could argue, in theory, that California’s increasingly erratic vacillations between torrential atmospheric rivers and drought make flood barriers even more important. BRIC grants don’t require applicants to have a climate change tie-in, although it is considered a plus in judging which projects deserve funding.

The reclamation district’s Bair says that Grimes’ residents take the issues with their levee “very seriously,” as evidenced by the town’s landowners voting to increase their property assessment to help fund the infrastructure improvement. FEMA provides 75% of the funding for BRIC grantees, or 90% for communities the government classifies as disadvantaged. For Grimes, the California Department of Water Resources is also chipping in. But ponying up even a token amount of money is a tall order for a place as small as Grimes, says Bair.

“There’s a lot of dialogue from the state about caring for disadvantaged communities,” he adds, “but what I found is that when it comes time for the construction funding, it’s been really short.”

The San Francisco skyline looked as ghostly as I’d ever seen it the day I visited Belvedere in October 2022. The gray sky and sea gave way to blue halfway across the Bay, with the sun glittering so fiercely on the water that I removed all my jacket.

My satisfaction at escaping the fog in the city soon gave way to uneasiness. The sidewalk where I stood was built atop a seawall that had sunk at least three feet since it was constructed 80 years ago. It ran along one of the only two roads that connect the island of Belvedere to the mainland, and that contain all the power and water lines for the residents. I could have touched the San Francisco Bay lapping off the seawall if I’d tried.

The town’s website coyly describes its roughly 2,000 residents as “Quieter in temperament than their counterparts in Palm Beach and Manhattan.” It continues: “Belvedere’s residents mostly eschew lavish fundraisers and instead roll up their sleeves to help restore historic structures, plant community gardens, mend books for the library, help design the renovation of parks, and serve on the PTA.”

Over the last decade, that civic spirit has manifested in Belvedere holding at least 53 public meetings about what’s now dubbed the Protect Belvedere Project. The town hosted Dutch government leaders and renowned architects; they formed a committee dedicated solely to the issue. When a plan was finally proposed to make both roads into Belvedere earthquake-safe and resistant to sea-level rise, many constituents were not impressed.

Beach Road is one of two that Belvedere could use for evacuation in case of an emergency. Both are built on top of aging seawalls. Photo: Sierra Garcia.

Residents “questioned the urgency of the flood control portion of the project,” noted vice-mayor James Lynch in a June city council meeting. Despite the higher price tag of splitting the seismic safety and sea level rise into separate projects, in large part because it would require digging up the roads twice, Belvedere has bowed to community opposition to completing both projects at once — meaning that the plan to install sheet piling and stabilize the two roads in case of an earthquake will move forward, but elevating the seawalls the roads rest on will be shelved for now. The roads are expected to continue sinking another half foot in the next 27 years, while sea level may rise up to a foot or more in the same timeframe.

City Manager Robert Zadnik says that this less efficient plan is just a contingency in case the FEMA funding falls through at the last minute. “If we are selected, Belvedere will make the choice to commit match funds, accept the award, and proceed with the full project,” he wrote in an email. According to FEMA’s regional office, Belvedere has already been selected, and should receive the $15,610,000 in funds after an  environmental compliance review is complete. It’s unclear whether the local skittishness around the seawall improvements will ultimately impact the project’s timeline or funding.

In the meantime, a ballot measure that proposed a 0.8% property transfer tax to help fund the Protect Belvedere Project seems poised for defeat. The campaign against the measure attracted more political donations than all of Belvedere’s other races combined. One of the talking points on the “no on D” website described the tax as excessive in part because “there is no shortage of revenue available for city leaders to access and fund truly necessary projects.”

In The Same Boat?

Like many small towns, both Grimes and Belvedere lean heavily on the state and federal governments to finance their future existence. Although FEMA did not comment on what made these towns specifically stand out as applicants for the tens of millions they seem poised to receive, both Belvedere’s seawalls and Grimes’ levee would need infrastructure improvements even in a world without climate change. In an alternate universe without rapid climate change, and without federal money for climate-ready infrastructure, the town of Belvedere might eventually shore up their seawalls with a tax. Grimes, like so many small rural towns, would face a more difficult path forward.

Climate activists often modify the cliche about us all being in the same boat with climate change: “we’re all in the same storm, but not the same boat.” Belvedere and Grimes are indeed caught between the same squalls of decrepit infrastructure and climate disaster. But the vessels they steer are unique, and offer a warning and promise to the thousands of other small towns — both well-off and not — that will inevitably follow them into the storm.

DONATE TO OUR NEWS FUND 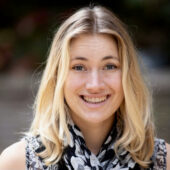 is an interdisciplinary marine scientist and environmental writer with a focus on oceans, climate, and communities. Her work has appeared in publications serving a wide range of audiences, including Grist, JSTOR Daily, the Oxford Climate Review, and Estuary News. She is a National Geographic explorer and 2022-2023 Fulbright research fellow.

Marin City Marches, Lives Depend on It