Construction is wrapping up on a new well in Marin County that will supply drinking water to Point Reyes Station, Olema, Inverness Park, Paradise Ranch Estates, and Bear Valley. It will also allow the North Marin Water District to transition away from its dependence on aging wells that are situated in places where seasonal high tides (and rising sea level) can cause increased salinity in tap water.

And the new well continues a ranching family’s commitment to sharing its water wealth.

To build the well, the water district activated language in an agricultural conservation easement to secure the land along Lagunitas Creek, which is part of the Gallagher North Bend Ranch.

“We kind of knew, historically, there’s not that many other good sites,” says Tony Williams, the general manager at North Marin Water. The Gallagher ranch was already home to one municipal well, thanks to a relationship with North Marin Water that goes back decades. The family knew a second well might be needed, so while working with the Marin Agricultural Land Trust (MALT) to put a conservation easement on some of their property, the Gallaghers included provisions for a second well.

“It’s a pretty atypical thing for an agricultural conservation easement to have the ability to add a municipal well,” says Zach Mendes, acting director of conservation at MALT. “The water district, MALT, and the family worked together to make sure that the easement language would actually allow for it.”

MALT also funded stabilization work along the Lagunitas Creek bank and planting of willows and native grasses through its Stewardship Assistance Program.

Williams expects the well to be completed, permitted and operational sometime this fall, joining the existing Gallagher property well, which has been in operation since 2015. Together, he says, they “will likely become our day-to-day wells.”

Mendes says while unusual, the arrangement ensures the continuation of agricultural operations on the property even as the same land contributes to drinking water into the future.

The Gallagher family has ranched for more than 140 years on 330 acres that include the bend for which the ranch is named, with Lagunitas Creek running through the property. In addition to partnering with the water district on the municipal wells, the family also has a history of generosity with its own well water. During drought conditions last summer, routine testing required them to run their well continuously for ten days. So they captured the water in a large tank and let neighbors come and truck away what they needed for their parched land. 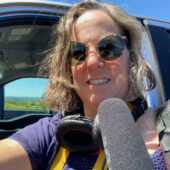 is a science journalist based in the Bay Area. She writes about ecology, agriculture and climate science and spent many years working in public radio. An alum of the UC Berkeley Graduate School of Journalism, she began her post-grad school career in Fairbanks, Alaska and has also worked in western Massachusetts and central Iowa. In 2022 she was selected as the lead science communicator aboard the JOIDES Resolution research vessel. She lives on a hill that on a clear day offers views of the Bay and Mt. Diablo.