Wildfire creates good habitat for birds — at least to a certain extent, and in certain parts of the Sierra, according to research published last year.

“In pretty much all of California, except the deserts and the wettest coastal areas, birds and the rest of the ecosystem evolved to live with fire,” says Alissa Fogg, an ecologist with conservation group Point Blue’s Sierra Nevada program and a co-author of the study, which looked specifically at birds within burned areas in lower and upper montane regions of the Sierra Nevada and southern Cascade ranges.

Prior to European colonization, fires burned across landscapes frequently, and because of that, stayed small. The massive conflagrations that we have become used to in recent years are the end result of nearly 100 years of fire suppression. Each year means more dead limbs, leaves, and other nature-made fuel gets added onto the tinder pile that our forests have become — and increases the chance of a massive blaze inflamed by drought and other symptoms of a changing climate.

Historically, the pattern of fires in the Sierra would look like the spots on a dalmatian, Fogg says — small and scattered, but lots of them. Today, they are more like the patches on a beagle. One spot might cover half the dog (or, mountain). “Before white colonists arrived, areas of intense fire were usually about 25 acres in size,” she said. “Now they are 30,000 acres, or more. These big patches start to homogenize the landscape, even entire watersheds.”

This study looked at how birds fared in different types of burned areas — specifically, within an intensely burned patch, how many and which species were found in the places where the blaze burned most intensely (patches where only a quarter of the trees, or less, survived). Surrounded by a sea of partially burned forests where many trees persisted, the scientists were examining islands of near-total deforestation. In these zones, after each fire, a new landscape is born: from the scorched earth, seeds long sleeping awake, new ones are deposited, and a thriving landscape of shrubs, ferns, and wildflowers springs forth — vigorous and beautiful. But it will be a long time until the baby tree seedlings mature into anything like the forest that once stood.

So, this study asked, how do the birds respond to these newly minted open landscapes? How do their preferences change over time, as the shrubs grow? And when they find themselves in one, would they rather it is large — a modern beagle spot thousands of acres across — or small?

While the answer depends on the species (lazuli buntings and hairy woodpeckers thrive in the largest of intense burns) most birds prefer the old way, a small dalmatian spot, to massive intense burns. They appear to prefer staying near areas with mature, established green trees — even when out in the exposed high-intensity burn areas.

“In general, western birds really like edges,” Fogg says. “Even a large high severity patch can be good, if it burns in a shape where you have a lot of edge [adjacent to areas with more trees].”

When no edges are nearby — which happens often, in today’s modern wildfire pattern — the birds found far from the edges were also found in the edge areas, and the overall diversity of species went down. “Tree nesters saw the steepest decline, with cavity nesters disappearing after an initial peak, while ground and shrub nesters were relatively insensitive to high-severity patch size,” Fogg says. “But all the live tree nesters declined.” 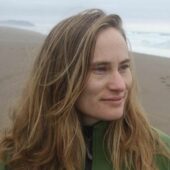 What’s in the New Climate Report in Under 3 Minutes