The Bay Trail connecting Sausalito and Mill Valley is a bustling pathway where recreational bicyclists, bike commuters, and pedestrians all mix amidst the bayfront marsh scenery of the Bothin Marsh Open Space Preserve. Around thirty times per year, though, this scene looks dramatically different, as high tides flood the area with seawater, making the path impassable.

Experts say this demonstrates how vulnerable the path and marsh are to sea-level rise, and an ambitious new project is underway to re-engineer the pathway and help the marsh adapt to this future. On June 8, the team working on this “Evolving Shorelines” project announced a final design that moves the Bay Trail to follow the perimeter of the marsh, but the decision didn’t come easy.

“Slowing the pace of sea-level rise is critical to giving the marsh its best chance of survival: the slower the rate, the better opportunity the marsh will have to adapt. It’s a good reminder that climate mitigation and reducing carbon emissions are still our biggest tools to reducing impacts to our environment.”

“It was evident that the multiuse path is our most-used park asset, and it’s extremely visible to the public,” said Veronica Pearson, ecological restoration planner with Marin County Parks and part of the One Tam team leading the project. “And we wanted to be very conscious about how we develop the plan for adaptation and keep the public in the loop.”

In partnership with Golden Gate National Parks Conservancy, the project team has sought community input and guidance from the start. Indeed, this stretch of the Bay Trail is so popular that addressing its vulnerability to sea-level rise makes a great launchpad for conversations about climate change adaptation and the role of tidal marsh ecosystems. These ecosystems not only provide habitat for wildlife, they also act as natural water-filtration systems between the land and Bay waters and sequester and store large amounts of carbon.

The rising Bay isn’t a concern for the distant future; experts project a foot of increase in Marin by 2030, producing flooding events around 220 days per year. The one-foot increase would submerge the mudflats and shift the high-tide line closer to the road and communities, subjecting businesses and homes along Shoreline Highway to frequent flooding. By the turn of the century, impacts will be far worse.

The project team plans to take on the most urgent adaptations first, such as resurfacing the Bay Trail to maintain functionality for recreation and transportation. Walking or biking along the trail today, one can already see the corrosive effects of flooding seawater evident in the trail’s pocked surface. Project leaders also plan to create raised marsh mounds and improve connectivity to tidal channels, which will not only preserve quality wildlife habitat but also help the marsh adapt to the shorter-term impacts of sea-level rise up to about two feet. Ultimately, however, planners seek to prepare for up to four feet of rise by 2060.

Although the rich biodiversity of the marsh gives the feeling that it predates the human development surrounding it, the truth is that this area has undergone extensive changes over the last 150 years. In 1851, most of what is now marsh was actually open water. Significant engineering changes began in 1924 in order to support first a railroad bridge, and later a berm. The Bay Trail of today follows the footprint of this old railroad berm. This was followed by a 1960s flood-control project that rerouted Coyote Creek, impacting sediment supply to the marsh from the watershed.

All this engineering means that the natural processes that would sustain the marsh into the future aren’t in place, including a restoring flow of sediment needed to counteract erosive wave action. Despite these human impacts, the marsh habitat has become a vibrant habitat for wildlife and plants, offering views of acrobatic dives of Caspian terns alongside the more slow-moving elegance of Black-necked stilts as they forage in the mudflats.

In October 2020, the project team presented three different trail alignment options to the public and explained related impacts to Coyote Creek. On June 8 of this year, following community input, the team announced the favored plan, which realigns the Bay Trail to follow the perimeter of the marsh. The design leaves the old trail embankment in place to create new, higher marsh habitat for wildlife and provides a buffer between the shoreline and waves coming from Richardson Bay.

A new raised embankment along the marsh perimeter offers higher ground for the trail, flanked by an ecotone slope (vegetated transitional habitat), as well as a buffer between the road and community and the high tides. Without the bisecting trail in the way, the plan allows the marsh to undergo a more natural adaptation process. The project is still in the planning and permitting stage, with implementation slated for 2025.

As excited as the project team is to tackle such a big challenge and test some of these adaptation techniques, Rob LaPorte, project manager with Golden Gate National Parks Conservancy, emphasized that we can’t miss the forest for the trees. “Slowing the pace of sea-level rise is critical to giving the marsh its best chance of survival: the slower the rate, the better opportunity the marsh will have to adapt. It’s a good reminder that climate mitigation and reducing carbon emissions are still our biggest tools to reducing impacts to our environment.” 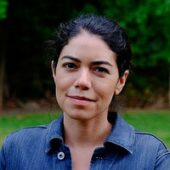 writes about wildlife ecology and environmental science. Her background as a wildlife biologist often leads her to stories about the joys of scientific discovery and the ways that people interact with, and about, the environment. See her website for her writing and photography