On a warm Sunday afternoon in late August, Sustainable Solano’s Alex Lunine and two local high school interns led a flood walk in Suisun City. Lunine carried a four-foot-long wooden pole marked by one-foot increments. Although he never referred to the pole during the walk, the visible marks loomed large as he explained that sea levels are predicted to rise between six and ten inches by 2030 and 13 to 23 inches by 2050. The Adapting to Rising Tides Flood Explorer Map shows that, unless action is taken, 24 inches of sea level rise will flood much of the eastern and southern parts of the city.

Suisun City is particularly vulnerable to rising waters, an issue first covered by KneeDeep Times in a January 2022 article called “Suisun is No Island.” The community is bisected by Suisun Slough, a wide waterway that terminates in a downtown basin surrounded by a flood wall. The city is also surrounded on three sides by marshes, a vulnerability that may also serve as part of the solution.

In recent months, Suisun City has been exploring a number of ways to increase its resiliency to sea level rise and storm surges, including updating infrastructure, building an ecotone levee, and holding a resiliency workshop.

One project at the southwest edge of town will restore the Kellogg Pump Station and its adjacent 850-feet-long and 50-feet-wide stormwater channel. The pump system at the downstream end of the channel conveys collected stormwater into the Suisun Slough. Both are at risk from early flooding.

The local sewer district is now reviewing proposals to design a nature-based solution to increase the flood and fire resiliency of the pump station and channel, improve water quality with green stormwater infrastructure, and explore options for a public park with walking trails and interpretive signs. One of the stated visions in the request for proposals is a 900-foot-long ecotone, or horizontal levee, a broadly sloped levee planted with native plants and scrub vegetation to slow water flow.

The district will choose a contractor in late October 2022, who will collaborate with nearby landowners and other stakeholders on three alternative designs. The district expects to choose a preferred design by May 2023. The state approved $8.6 million in its 2022 budget for the completion of the project.

“You think about the San Francisco Bay and what a big landscape it is,” says Emily Corwin, project lead and senior environmental engineer at the Fairfield-Suisun Sewer District. “Even these small projects can add to improving the overall quality of the environment.”

Many more such projects are needed around the Bay. Indeed, the Kellogg station is one of dozens of aging pumps throughout the region ill-equipped to handle the increased flooding expected as sea level and groundwater rise combine with atmospheric river events and storm surges.

Suisun City’s Kellogg pump station and stormwater system protect the Cordelia Gateway Neighborhood, where homes and apartment buildings are at ground level. The same neighborhood is vulnerable to fire. In June 2020 a wildfire fueled by 100-degree heat and high winds burned 300 acres in nearby fields. The fire jumped the channel and burned eleven homes, four beyond salvaging. The fire also damaged the Suisun Wildlife Rescue Center next to the pump station. One of the goals of the Kellogg Resiliency Project is to build a fire road beside the channel, one that could double as a recreational trail.

In addition to the Kellogg project, Suisun City is taking other steps to improve its resiliency. In June 2022, the city partnered with The Nature Conservancy, Sustainable Solano, and the San Francisco Bay Conservation and Development Commission for a community resilience building workshop. The Nature Conservancy has conducted this process for 450 communities in 12 states; Suisun City is the first West Coast city to participate.

A core team of concerned citizens (that included this writer) hosted a three-hour online workshop with community members, public officials, and representatives from the San Francisco Estuary Institute and UC Davis’s Center for Watershed Science. The workshop defined hazards, such as climate change induced flood and fire; recognized strengths, including a county-wide greenbelt ordinance that has resulted in 98% of the population living in cities; and identified actions like strengthening coordination among scientists and agencies to protect the Suisun Marsh while looking for ways to utilize the marsh in nature-based adaptations to hazards.

The findings of the workshop were presented to the Suisun City Council in September, and the community is invited to a listening session about the findings at Suisun City’s Environment and Climate Festival later this fall. The flood walks led by Sustainable Solano will likely be offered through December 2022. 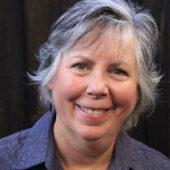 writes about the nature, history and culture of California. Trained as a geographer at San Francisco State University, her passion is to look for the intersection of influences regarding a place or an event. She is a frequent contributor to Estuary News Group and Bay Area Monitor. Her work has also been published in Smithsonian, High Country News, Christian Science Monitor, Los Angeles Times, and San Francisco Chronicle. She is the award-winning author of Ina Coolbrith: The Bittersweet Song of California's First Poet Laureate.