In April, a developer proposed a new gas station near a busy intersection in the City of Napa. Not long ago, policy guidelines would have led planners to move the proposal forward. This time, thanks to footwork by citizens and elected leaders, the project was discouraged from the outset.

This was a full-circle moment for Napa climate champions like Jim Wilson, who says, “Leaders need to acknowledge that a climate emergency threatens the residents of Napa County, and the entire world, and they must respond with the necessary emergency measures.” After years of advocacy, his sentiments are reflected in policies of a growing list of North Bay cities.

On June 7, Napa County joined them.

In a remarkable victory for Napa County’s climate activists, the Board of Supervisors adopted a resolution declaring a climate emergency and set a target of net zero greenhouse gas emissions by 2030. While non-binding, the move is significant because of its countywide impact.

Wilson and others have worked for years to make this happen. In countless pandemic-era Zoom meetings, concerned citizens, students, elected leaders, and scientists discussed what to do, and how. Wilson says, “We had two non-negotiables. First, declare a climate emergency. Then, set a 2030 deadline to achieve net zero climate pollution.”

The project gathered momentum over the last year, as city after city adopted these urgent goals. High school students Emily Bit and Alisa Karesh, co-leaders of Napa Schools for Climate Action, encouraged elected leaders to get involved and made a case for action. Wilson, in turn, helped them by identifying allies and creating a network for the young activists to leverage.

It began in Calistoga, where City Councilmember Gary Kraus, a former fire chief, was moved by the seriousness of the students’ call to action. Kraus set the stage for success by introducing Bit and Karesh to Antoinette Maillaird, chair of Calistoga Green Committee, who helped them hone their message. Napa Schools for Climate Action made their case to the Calistoga City Council and, on August 3, 2021, they unanimously passed a resolution declaring a climate emergency and committed to net zero climate pollution by 2030. In late December, they banned new gas stations.

The student climate group’s next target was American Canyon. They knew there was already organized support for climate action there, so they worked with councilmembers Pierre Washington and Mark Joseph to focus their messaging. Following a gas station moratorium a year prior, the City Council passed an ordinance to ban new stations in February, 2022. The same day, they adopted a climate emergency resolution with a net zero 2030 deadline.

After that, students were able to persuade the towns of St. Helena, Napa, and Yountville to adopt the same or similar language in a few months’ time. “Having the precedent made it so other cities didn’t have to go first,” says Wilson.

Students protest on the steps of the Napa County offices in 2019. Photo: Amber Manfree.

After the five largest municipalities in the county formally acknowledged the climate emergency and agreed to a 2030 goal for net zero climate pollution, Napa County supervisors did the same this June.

So far, the goals are non-binding. But they do provide a reference point for planners. The developer who proposed a new gas station received a reply from City of Napa staff saying, “it is unlikely that a new gas station, drive-through, or other similar use would be approved,” at this time, and “it is likely a future moratorium on drive-through facilities and fossil fuel service stations will be adopted.”

Residents are hopeful that this is the first of many climate-smart planning decisions to be made throughout the county, and beyond.

Napa Climate NOW! has established an ongoing student achievement award in honor of Bit and Karesh, who begin college this fall. Students who follow in their footsteps will be honored each year. 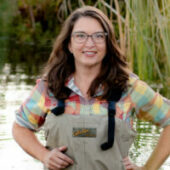 is an independent geographer. Her specialties are spatial analysis, cartography, and natural resources management. Her knowledge of landscape change informs her graphic design and allows her to communicate science in insightful ways.