Putting out Fires is Just the Beginning

The lingering effects of wildfires on ecosystems and communities are varied, but one of the more notable — and less understood — is the effect on water quality. Conversations around post-wildfire water quality management are producing new insights for monitoring programs across the state.

“We’re looking at a potentially really bad fire season,” says Tegan Hoffman, co-founder of Coastal Quest, a non-profit group working in-part on understanding the post-fire effects on coastal water quality and infrastructure. “So we really need to be protecting our watersheds.”

Several studies on post-fire water quality have shown that drinking water could become contaminated in a wildfire affected area from burnt plastic plumbing. Contaminants may enter the water system after pipes reach high temperature and then are later exposed to running water.

Beyond plumbing, and in the watershed, a 2020 study suggests post-fire runoff may be more cloudy and include more suspended particles. The significance of these effects on the water is proportional to the size of the area burned. Contaminants such as dissolved organic carbon, dissolved organic nitrogen, and ammonia may increase in concentration in water post wildfire, according to the study.

Eric Stein, a lead biologist with the Southern California Coastal Water Research Project, has been studying post-fire water contaminants since 2005. Stein says he entered this research accidentally when several stormwater sites he was monitoring burned in a wildfire.

“We already had pre-fire data from our ongoing studies and so we took advantage of that to start to look at some of the post-fire data,” Stein says.

Stein and the Southern California Project focused on studying water contaminants in post-fire runoff like metals and organic compounds that municipalities are usually required to manage. While doing this research, Stein found that post-fire monitoring is more difficult than expected due to the unpredictability, and spread, of wildfires across jurisdictions.

In 2010, Stein and his team put together a plan for Southern California municipalities to address these impacts and challenges. Twelve years later, the plan has been put to limited use, Stein says. Coastal Quest has now partnered with Stein’s team to incorporate their knowledge and suggestions into a pilot monitoring program based out of Ventura County, California.

The pilot is part of a Coastal Quest effort to organize collaboratives in Northern and Southern California to standardize post-fire monitoring systems and inform management plans, and thus reduce the impacts of fire on ecosystems and communities.

While the project awaits additional funding, Stein implores community members across the state to realize the importance of this post-fire research.

“I don’t think people think so much of the water quality effects,” he says. “If some of these contaminants get into drinking water reservoirs they can have [more direct effects on human health].”

In the meantime, communities and watersheds across the state face the impacts of wildfires at an increasing rate due to climate change, drought and past forest management practices. Now more than ever those both experiencing and monitoring impacts will need to come together and address lessons learned. If not they risk compounding threats to our infrastructure, ecosystem and planet at large, down the line. 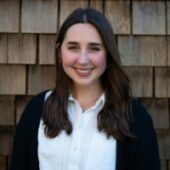 is a multimedia journalist and master’s student at the University of California, Berkeley’s Graduate School of Journalism. The majority of her work has been focused on climate change, outdoor recreation and freshwater issues. Her writing has been featured in Earth Island Journal, Berkeley Science Review, SKI Magazine and Oakland North. You can find her work at callierhoades.com.