“I started asking around in the community, and I found out that we don’t have an emergency contingency plan. Nobody knows any evacuation routes.”

Thirty years ago, Ever Rodriguez moved to North Fair Oaks. A small slice of town between Menlo Park, Atherton, and Redwood City, even then North Fair Oaks was a “magnet for those starting up,” he says, as one of the few affordable places left in the San Francisco Bay Area for immigrants. Though he and his wife would briefly move to Redwood City, North Fair Oaks kept drawing him back. With three quarters of the 15,000 people who live here from Hispanic communities, Rodriguez, an immigrant from Mexico, felt more at home there than anywhere else in the region. “You start meeting neighbors, you start putting out roots. And you feel like you belong, which isn’t something that happens to a lot of immigrants.”

When they ended up purchasing a house, though, Rodriguez noticed how North Fair Oaks differed from surrounding areas. “We don’t have the same infrastructure or services as in Menlo Park.” He described how the tree canopy disappears when you cross from Menlo Park to North Fair Oaks, how the sidewalks become almost impassable, how the number of streetlights decline, leaving dimly lit roads. Eventually, he realized what the problem was: North Fair Oaks was an unincorporated community, meaning no municipal government oversees it, unlike Menlo Park, Atherton, or Redwood City. North Fair Oaks is directly managed by San Mateo County as a result. In response, he set up the North Fair Oaks Community Alliance, an organization that “advocates to improve life for all in North Fair Oaks.”

Rodriguez saw NFOCA’s initial role as uniting the community. But in the last few years, the organization adopted a broader role: fighting climate change as it manifested in North Fair Oaks. This summer, as wildfire and smoke season threatened, NFOCA took charge of its own emergency preparedness to get residents ready for a smokier future in the absence of dedicated county support.

In late July, with support from Stanford’s Graduate School of Business, NFOCA organized what was meant to be a small workshop for community members showing them how to build their own air purifiers. They expected 20 attendees at most. Other organizations like Climate Resilient Communities had been distributing purifiers among North Fair Oaks residents, in exchange for data on purifier usage. So Rodriguez was “overwhelmed” to see 50 people swell the workshop, far beyond the event’s capacity. People wanted to take charge of their own clean air. In North Fair Oaks and communities like it, historical patterns have shown residents they cannot depend on municipal or outside support to build climate resilience.

When Hurricane Katrina hit New Orleans and the city flooded, Rodriguez paid particular attention to how systems broke down as emergency responders struggled to reach people, even three to five days after. He thought about how a natural or human-caused disaster might play out in places like North Fair Oaks. “I started asking around in the community, and I found out that we don’t have an emergency contingency plan. Nobody knows any evacuation routes. And hearing about climate change, and the potential effects, I started thinking.”

How to plan for climate change-related emergencies is a discussion happening across California today. The state government has urged cities and communities to establish centers called “resilience hubs”. These “hubs” can be cool refuges during extreme heat events, and have industrial air filters for wildfire smoke events.

With higher rates of asthma than the rest of California, and growing exposure to bad air days, North Fair Oaks residents are at risk for health impacts during wildfires. But no refuges during wildfire smoke events have been established there to date. Surrounding areas like Redwood City have dedicated members of local emergency preparedness task forces tasked with setting up clean air facilities during smoke events.

Recent research conducted by the North Fair Oaks Community Alliance and Stanford University  suggests many North Fair Oaks residents had never heard of the concept of a community clean air center for wildfire smoke events. Many residents felt intense anxiety about their safety. “I don’t think wildfire smoke is on our radar. I don’t even know if it’s on the county’s radar,” one schoolteacher told the researchers. All community members interviewed indicated interest in a clean air center. “If I knew where to go to…breathe well…we would go,” a construction worker said during the study’s interviews.

But setting up clean air centers in unincorporated communities is not as easy as it is in incorporated areas, as Rodriguez, NFOCA, and collaborators at Stanford found in the years they have been working to liaise with San Mateo County Department of Emergency Services. The Stanford researcher Ryan Treves encountered “challenges in communication” and a “persistent misalignment in the vision of the county and the community alliance.” As part of the project, NFOCA and Stanford developed a list of sites for potential clean air centers. When they compared it with San Mateo County’s list, they noticed the county had omitted many viable sites.

Kevin Foiles, at the Department of Emergency Services, emphasizes that the Department is a new institution in San Mateo County. However, North Fair Oaks is a “huge priority”, he says. According to Foiles, the Department is working to ensure the community has access to “the same diversity of services” as neighboring towns and wants to “give people options” in extreme heat and smoke events. The county is currently signing memoranda of understanding with locations for resilience centers.

Communities elsewhere in California have had similar challenges with county coordination. When the 2022 Six Rivers Fire approached, Willow Creek, an unincorporated community in Humboldt, struggled with communication and coordination as the smoke thickened. Blaze Shannon, Community Coordinator for the Lower Trinity Prescribed Burn Association, described how she had to get help from Trinity County, one of the two counties Willow Creek falls under, after Humboldt County did not provide air filters. “The communication wasn’t there,” she says. It took 26 days after the fires started for a coordinated response from the Humboldt County Office of Emergency Services, by which time most community members were already experiencing health effects. Shannon says volunteers and existing community networks, such as the local Facebook group, were critical to getting people to safe air, as opposed to government-led communication.

Clean air centers and other community-based climate resilience solutions are gaining attention across California, especially as local, county, and state funding initiatives promise millions of dollars of support for resilience spaces. But these resources can be inaccessible to unincorporated communities with volunteer community leaders, without access to grant writers or training. “There’s only a handful of us,” Rodriguez says. “[Governments] don’t see their money well spent on such a small potatoes community organization.”

Looking ahead to next year’s wildfire season, Rodriguez and the North Fair Oaks Community Alliance are planning a follow-up event soon to teach more residents how to create air purifiers in their houses. “Nobody’s going to come and rescue us. So we might as well start.” 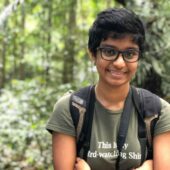 is a senior studying ecology and science communication at Stanford University. She comes from India and grew up across Hong Kong, London, and Singapore. Her writing and reporting has been published in Current Conservation, Voices for Biodiversity, and China-India Dialogue, among others. She is passionate about whales and savory scones.