Joselyn Geaga-Rosenthal, a block leader in 2016.

“The international community has been very clear it’s not going to get its act together on climate change…It’s been up to cities for a while.”

Joselyn Geaga-Rosenthal wanted to shrink her carbon footprint. So when the city of Los Angeles started a pilot program called Cool Blocks, she signed up to be a block leader. Every other week, she met with four neighbors on her Echo Park street to set goals like taking shorter showers, making fewer airplane trips, and washing and drying clothes more efficiently.

Four and a half months of meetings transformed the retired social worker’s life. Disaster preparedness training, included in the Cool Blocks program, meant she had plenty of water on hand when there was a brief contamination of her water supply. Cutting down on her waste, she reduced the trash in her city-issued garbage can by 50 percent. Even now, five years later, the bin that once brimmed with garbage still runs only half-full. The change, she says, “was amazing to me.”

But equally important were the connections she made with once passing acquaintances who became friends. During the pandemic, her younger neighbors checked in on Geaga-Rosenthal, now 74, to make sure she was okay. “That was very nice, very heartwarming,” she says.

If Los Angeles is successful, Geaga-Rosenthal’s experience will be repeated citywide, reducing the metropolis’ carbon footprint as it brings residents together, block by block and neighborhood by neighborhood. This January marked the launch of “Cool Cities Challenge” in three California cities – LA, Irvine, and the North Bay’s Petaluma. The program is designed to kickstart climate action and disaster preparedness at the micro level: individual homes, blocks, and neighborhoods. Organizers hope that what begins locally will ultimately become a blueprint for how to decarbonize cities and save the planet from some of the worst effects of climate change.

Palms area of Los Angeles, where some Cool Blocks programs got their start. Photo: Adriana Pera.

“The international community has been very clear it’s not going to get its act together on climate change,” LA City Councilmember Paul Koretz writes in an email exchange. His office is leading the Cool Blocks campaign at City Hall. “It’s been up to cities for a while. And if it’s up to cities, it becomes LA’s problem, as the most influential city in California (if not the world), to figure it out, do it on a neighborhood-by-neighborhood basis, and create a substantial model for the rest to follow.”

This may sound like a moonshot at best, naive at worst, admits David Gershon, who dreamed up Cool Cities and is funding it with philanthropic donations to his Empowerment Institute, a Woodstock, New York-based consulting and training organization. The institute has offered each of the three chosen cities a $1 million grant to fund their nascent programs.

But climate change is speeding up, and other options (international climate accords, domestic legislation) seem to be faltering. “Unless we’re doing moonshot thinking, and moonshot strategies at this point,” Gershon says, “there’s nothing else worth trying because we don’t have a lot of time.”

Gershon has run various iterations of this idea for 30 years, in cities across the country and countries around the world, with programs named Green Living and Cool Communities and Water Stewardship. He decided to launch this latest program in California “because California is the state for early adopters on climate,” he says. Cities in the state competed for the grants last fall, filling out an extensive application that included recruiting at least 200 volunteer Cool Block leaders.

The program’s already getting “an amazing amount of traction” in Petaluma, says D’Lynda Fischer, a Petaluma city councilmember. When the small city of 60,000 holds informational events on the topic, hundreds of people show up. The first cohort of 50 Cool Block leaders was trained in early January, knocked on doors and, by early February, had already had their first block meetings, she says.

One spur to action is probably the Sonoma County town’s close proximity to recent, cataclysmic wildfires. “Two years ago we were surrounded by fires,” she says. “There aren’t many [climate] deniers here.”

The City of Irvine, which did not respond to a call for comment, had scheduled two Cool Block leader training sessions for late January. Los Angeles held multiple trainings for its first cohort of 30 block leaders in February, says Lisa Hart, the city’s Cool Blocks program manager. “Things are kind of crazy right now,” she says. “But it’s exciting. It’s happening.”

A family near Irvine added rain barrels under downspouts to support their increasingly drought-plagued garden.

In addition to Los Angeles residents, the LA program is also training block leaders in the adjoining, smaller cities of Culver City, Malibu, and La Cañada Flintridge, so they can take the program back to their neighborhoods, says Andy Shrader, director of environmental affairs, water policy, and sustainability for Councilmember Koretz.

Erica Hart (no relation to Lisa) hopes the new groups have an experience as good as hers, during the original, pilot program. Hart, who lives in the Palms neighborhood of West Los Angeles, volunteered to be a block leader because she wanted to live more sustainably. As an apartment dweller, she had the only “vertical block” in the pilot program. There were eight people in all, from different floors of the complex.

She ended up tweaking her lifestyle, already fairly eco-conscious, to shrink her carbon footprint. But she’d made zero preparations for a disaster, and even though she’d lived in her building for six years, she didn’t really know her neighbors. “I definitely came in wanting the sustainability,” says Hart, now 33, “and left with all this disaster resiliency knowledge that I didn’t know I needed and with a full community in my building.”

Shrader, the aide to Councilmember Koretz, imagines a city full of small, neighborly clusters like this, ready to take on severe heat, earthquake, flood, fire – whatever disaster hits. Because if residents aren’t prepared, he says, Los Angeles could look like the Pacific Northwest last summer, when a heatwave hit killed more than 100 people in Washington and Oregon, and nearly 600 in the Vancouver, B.C. region. “We want [ready] communities for what’s coming in terms of climate impacts,” he says. “If we have a big event like that, we’re not going to have enough first responders. We want to make sure that neighborhoods are able to take care of themselves for a week or even two.”

Ultimately, though, the Cool Blocks program is about offering hope for a better future – and tools ordinary citizens can use to get there. “The way we’re going to reduce our emissions on time is at the city level,” he says. “I think people really just want something to do.” 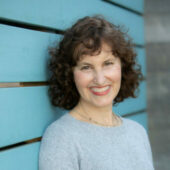 is a freelance writer in Los Angeles. Her work has appeared in the New York Times, the Los Angeles Times, Vogue and Westways, among others, and can be viewed at www.constancesommer.com.