While monarch butterfly numbers at traditional winter roosts on the California coast hit an all-time low of about 2000 last winter, citizen-science observers have noticed that some remain in the San Francisco Bay Area year-round.  Biologists Elizabeth Crone (Tufts University) and Cheryl Schulz (Washington State University) estimate a resident population of 12,000 in northern and central California, extrapolating from a Berkeley survey.  Resident monarchs may provide a hedge against extirpation, but pathogens may spread from residents to migrants. The shift could reflect warmer and drier conditions or increased fall and winter availability of tropical milkweed and other food sources.  It’s not unprecedented: monarchs have dispersed to Western Europe and North Africa, the Caribbean, and the South Pacific, and most of those populations don’t migrate.

Climate effects on either the decline of the migrants or the recent behavioral change are hard to verify. “We can’t tell just from the data we have now whether it’s land use or climate change that’s driving the decline,” Crone explains. “There’s a stronger correlation with the development of land along the coast and the use of pesticides.” California’s recent wildfires have been proposed as a factor; while data is lacking, she thinks that’s worth investigating.  The US Fish & Wildlife Service hasn’t reversed the Trump administration’s refusal to list the monarch as endangered, and a court decision last year excluded insects from protection under the California Endangered Species Act. Meanwhile, gardeners can help by planting monarch chow. “Adult monarchs need more than milkweed,” Crone notes. “They need a lot of different nectar plants to enable them to fly farther, live longer, and lay more eggs.”  While recommending native milkweed if available, Crone says the jury is out on tropical milkweed: “We don’t know if it’s good or bad. I wouldn’t encourage people to pull it up, but many other conservationists would.” 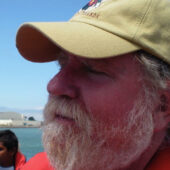 writes about endangered and invasive species, climate and ecosystem science, environmental history, and water issues. He is also "a semi-obsessive birder" whose pursuit of rarities has taken him to many of California's shores, wetlands, and sewage plants.