It all began on Labor Day weekend. As Americans prepared to celebrate the end of summer with a three day vacation, warnings of extreme heat invaded every news outlet. Triple digit temperatures are not something I’m used to. In the East Bay Area, where I’m from, I’d describe the weather as mostly temperate. My sister and I joke that anything above 75 is too hot to leave the house. Despite my own advice, I decided to venture outside to see how the people of Sacramento were faring. By the end of the week, the heat wave had finally broken, and I’d ended up making new friends, frying my phone, and joining a local community organization.

The week began with a record-breaking high of 115 degrees. To my father’s dismay, I abandoned the comfort of my approximately 68 degree abode and journeyed outside. Quickly grabbing a few cold water bottles in case anyone out there needed one, I opened the door to what felt like a dry sauna. I hopped in my car, burning my leg on the black leather seat before hitting the AC button and heading downtown. It wasn’t long before I saw the first heat advisory sign on the freeway:

As I exited onto the streets of downtown, the only people visible were houseless folks, mostly resting under trees or communing together in encampments. As I passed Cesar Chavez Park, a popular location for homeless camps, I noticed a long line of people, cutting directly through the plaza. As I got closer, I saw a small group handing out plates of food and bottles of water, as well as cooling packs and wet towels. I was hesitant to bother anyone in the heat, so I looked on in admiration before heading back to the home AC.

The temperature the next day wasn’t much better — 113 degrees, so I decided to stay inside. As I tried to keep cool with a water bottle in one hand and an ice pack in the other, I thought about my winter days on the East Coast during college. I used to brag about California’s warm weather to anyone who’d listen and daydream about summer days back home. I’d think how, if I ever fell upon hard times and was without a home, California is where I’d want to be. Now, I wasn’t so sure. Thinking of all those people I’d seen at the park, I grabbed my computer and looked up volunteer organizations that help people during difficult times. I found a few in Sacramento and wrote them down.

The air felt cooler when I stepped outside the next day to go to my part-time job, but the later demise of my phone would reveal otherwise. I work with children at a school in North Sacramento and although kids are known to be resilient, outbursts, including one caused by a missing water bottle, seemed more frequent as the day progressed. Plus, energy was low. Late afternoon, we briefly went outside for a recess, which soon proved to be a mistake. When we returned inside, I pulled out my phone only to realize it wouldn’t come on, despite several message chimes still coming through. On a computer, I Googled what this could mean, which led me to the term “black screen death.” The heat had killed my phone.

The next morning, my phone and I were both exhausted from the sun. Regardless of the fact that it would be 111 degrees today, I had to go out to get it fixed. I headed to the Apple Store at the mall, and in about an hour, my phone had come back to life. As I moved towards the exit doors, I noticed a young woman outside. She was sitting down next to a handful of colorful markers, writing on a small cardboard sign with pink ink. The sign read “Homeless and Hungry.”

We spoke for a few minutes. She told me her name was Elizabeth and she was 18 years old. She was living in an RV with no generator, so she’d come to the mall to escape the heat. When I asked her how she’d been feeling, she replied “I can’t explain it to you really…just something else to be mad at.”

In spite of how the heat was making her feel on the inside, she laughed and chatted with me. I told her about the local cooling centers, but she had no idea what I was talking about. Curious if people were even utilizing the centers, I told Elizabeth goodbye and headed to a center I knew of near downtown.

The building was large and plain, and the entrance was pretty difficult to find. I followed multiple paper signs taped along the sides of the building before finally discovering a glass door with a final sign that read, “Cooling Center entrance. No weapons allowed inside.” When I entered, I noticed maybe five or six people. I decided to speak to a couple who were sitting towards the back with their dog, Luna. Their names were Kelvin and Brenda and they were currently living in their car while trying to find a more permanent place to live.

Kelvin playfully teased his wife for being irritable and grumpy due to the extreme heat, but once again, I was only met with warmth. Before this week, they’d never known about cooling centers. They both described the centers as a “blessing.” We exchanged numbers and well wishes as I left them to rest. I walked outside and looked up at the sky. There was dark smoke swirling above the trees. Another fire.

I tried to take my pomapoo and daschund, Nala and Millie, on a walk early in the day before it got too hot. As we walked along our usual route, I noticed the sun was nowhere to be found. The air felt thick and smelled of smoke. I made a mental note to keep a mask on before I headed home and then downtown for the day. During my research for local community organizations, I’d come across one called Alchemist CDC. They’d been helping Sacramento residents set up cooling stations with water, ice, and shade in their own yards and driveways. I drove around, stopping at a few of these stations where I noticed people taking water and food.

This was a truly miserable week for us Sacramentoans, but rather than anger or frustration, I’ve witnessed acts of kindness and communion. It filled me with faith that as we continue to experience the disastrous effects of climate change, we won’t abandon each other. It’s also inspired me to get more involved in my own community. Instead of letting the heat get the best of us, we’ve allowed it to bring out the best in us. Maybe the hottest week ever wasn’t so bad after all. 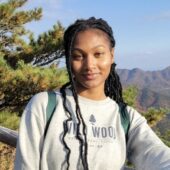 is a freelance journalist currently based in Sacramento. She works at the intersection of identity politics, social justice, culture, and climate resilience. Her writing has appeared in a number of publications, including the Bold Italic, The Seattle Medium, and Essence magazine. You can also find her work on her personal website jasmine-hardy.com.

Napa Bets on Bikes for Students