The towering old-growth forests of California’s Redwood National and State Parks bring in hundreds of thousands of visitors per year. The draw, for most of these tourists, is to stand among the tallest trees in the world.

Planting trees is often top of mind when many people think of forest preservation. But Save the Redwoods League, the California Department of Parks and Recreation, and the National Park Service have been working on a multi-decade project to restore those second-growth forests by thinning them.

“The better we can steward these forests and use restoration practices that put them on a path to functioning as old growth forests, the sooner they are going to store more carbon and be more resilient in the face of climate change and other environmental stressors,” says Laura Lalemand, senior scientist with Save the Redwoods League.

“We’re sequestering more carbon than if we just left degraded second-growth forest to struggle along,”

Before the parks were created, they were private land. Some areas of today’s parks underwent industrial logging, while today’s old growth areas were protected before that could happen.

Foresters reseeded areas that were clear cut for timber with little regard for environmental conditions. They planted more Douglas Fir seeds and grew trees close together. In the mid-20th century, replanting involved dumping seed from helicopters.

Those processes created dense, dark forests. Today, light struggles to reach the forest floor and many trees have few branches. Low-growing plants like ferns are sparse.

“We’re not seeing a diversity of plants and animals in many of these young forests,” Lalemand says. “Everything’s very homogeneous and kind of stagnant.”

The new restoration initiative, called Redwoods Rising, is trying to undo those effects. That’s a major undertaking. The first phase alone is scheduled to last about 30 years and restore 29,000 acres of previously harvested second-growth forest. The project has already thinned about 2,270 acres.

Old-growth redwood forests are thought to be the most productive at sequestering carbon of any type of forest in the world. And the bigger they get, the better.

“As we’re doing this work, we’re actually sequestering quite a bit more carbon than if we just left degraded second-growth forest to struggle along,” says Steve Mietz, superintendent of Redwood National and State Parks. “It’s kind of like a sick patient in a hospital. As they recover, they get stronger. And as they get stronger, they put on more weight.”

Healthier trees are also more resilient to climate change. “If [the region] changes to a drier climate, then of course trees that evolved over millennia to be dependent on a [foggier] climate for moisture are going to struggle to adapt,” Mietz says. “The healthier a tree is going into a stressful situation, the more likely they are to survive.”

Redwoods Rising is one of the few major restoration projects undertaken in the parks since 2000 due to a dearth of federal funding. The public-private partnership with Save the Redwoods League was a creative way to do more with fewer federal dollars, Mietz says. The restorative thinning complements the prescribed burning and other forest management practices used elsewhere in the park.

Loggers still practice clearcutting today, but now there are some state protections, like mandatory riparian buffers. In 1973, California passed a new Forest Practice Act, buoyed by the growing idea that water, air, and forests were “public trust” resources, and that it was in the public interest to keep them healthy, says Erin Kelly, professor of forest policy and administration at Humboldt State University. Today, legal regeneration standards are still evolving to try to reflect ecological goals.

Aerial reseeding from helicopters has also gone by the wayside, she says. “You’re not controlling density, or ensuring the trees are well distributed. You’re dropping [seeds] and letting them germinate where they will.”

Today, many forest managers use seedlings instead, according to Chris Dicus, a professor of natural resources management at California Polytechnic State University. That’s more expensive than using seeds, but also gives more control over the types and spacing of trees planted.

Restorative thinning isn’t always popular. One 2014 paper suggested that second-growth redwood forests may be just as successful without human intervention. And many people still associate thinning with commercial logging. But Lalemand says the community remains supportive.

The organizations are using a variety of restoration methods in addition to thinning. They’ve removed about 17 miles of logging roads and installed about 50 large pieces of wood in streams to support aquatic and riparian life.

The project is first focusing on areas between sections of old growth. Creating contiguous old-growth forests helps the species that rely on those habitats, like the marbled murrelet. The land’s first stewards, the Yurok people, have also taken part in the restoration project.

Because the ultimate goal of the project, to create a future old-growth forest, can take hundreds of years to realize on its own, the true end result will be unseen by the project participants. “It makes me very hopeful,” Lalemand says. “I wish I could see these redwoods 500,000 years from now.  How incredible that would be.” 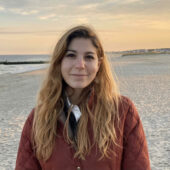 is a freelance reporter in New York. Her work has appeared in the New Republic, the Revelator, Vegetarian Times, New York Focus, and Washingtonian Magazine. She was previously a reporter at Inside Higher Ed. She is interested in the challenges of environmental preservation and how people choose to navigate them. She was inspired to write about second-growth redwoods, the focus of her first article for KneeDeep, when visiting the beautiful forests and coasts of California.